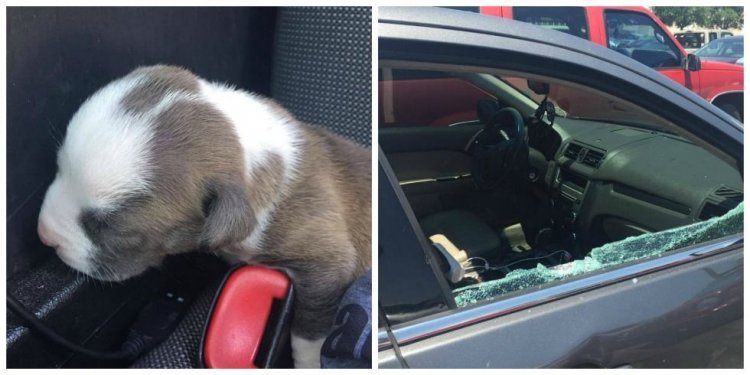 Police in Pensacola, Florida, smashed the window of a car to save a Cavalier King Charles spaniel puppy from a sweltering vehicle, then posted photos of the rescue as a warning to other dog owners in a Facebook post that has gone viral.

The tiny dog had been left inside a car in the Cordova Mall parking lot over the weekend, Pensacola-area television station WKRG reported. The temperature outside was 94 degrees, with a heat index of 108.

Officer Anthony Giorgio with the Pensacola Police Department was called to the scene after receiving a report that a puppy could be heard whimpering inside the vehicle.

“I put my hand in the car and could feel that it was hotter inside the car than outside, I called my sergeant and let him know what I had, and he instructed me to make entry and I broke the window with my police baton, ” Giorgio told WKRG.

His actions likely saved the puppy’s life, according to veterinarian Mark Sprayberry.

“I think he is a hero, and our police officers are our good friends, and they are here to help us, cause if he hadn’t, that puppy probably would have died, ” Sprayberry told the television station.

“Don’t. Just don’t. If you leave your dog in a hot car and that dog is suffering, we will do whatever we have to do to free him. Or her, ” the post stated. “We will drive your pooch to the caring folks at the Escambia County Animal Shelter and we will drop you off with the caring folks at the Escambia County Detention Facility.”

The post subsequently went viral, having been shared more than 12, 000 times by Friday morning.

Police have cautioned citizens that if they see a child or pet left in a sweltering vehicle, they must exhaust other means — including calling 911 and waiting for police — before they resort to breaking windows and initiating a rescue themselves.

The rescued puppy was later returned to its owner, who was issued a citation, Escambia County spokesperson Joy Tsubooka told WEAR, another Pensacola-area TV station. Tsubooka explained the puppy was still with its mother, which is why it was returned.