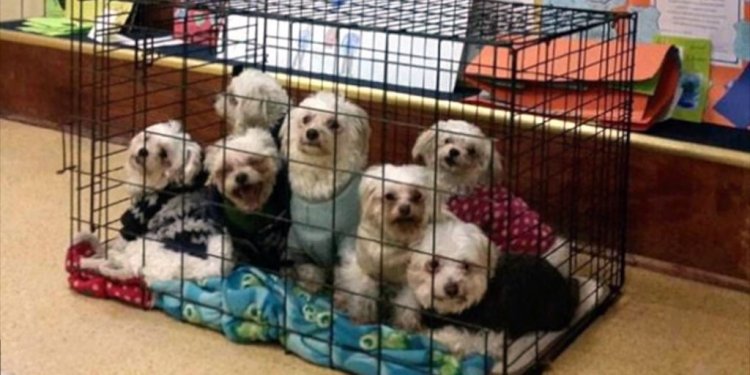 On Dec. 31, Julie Galante and the volunteers at Me and My Shadow dog rescue agreed to take on a horrific cruelty case: A young dog on the verge of death had been picked up in the field by an Orange County animal control officer.

"He was mauled, " Galante says. "Absolutely mauled. [Me and My Shadow] volunteers went to pick him up, and he had to be wrapped in a thick, heavy blanket because you could not carry him without putting your hands into, basically, a hole in him. It was shocking."

The dog, a little bully mix the rescue named Champion, had probably spent most of his short life being repeatedly attacked by other dogs. He had gaping open wounds all over his body, as well as wounds that had long ago healed over. He underwent four or five surgeries and a blood transfusion, and spent more than a month living at Piedmont Animal Hospital in Apopka, where doctors kept a close eye on his wounds, changed his bandages and helped him get back on his feet.

Two weeks ago, Champion was finally in shape to make his way from the vet clinic to his first foster home with volunteer Kristen Alwin Carbone, who says she has been impressed with how trusting Champion has been through all of his treatment, despite surviving so much abuse in his young life.

"He met her husband for the first time, and he was licking him all over, " Galante says. "He's kissing the other dogs in the house, engaging with the other dogs. He's not doing anything about the cats. He's just extremely loving, and that's a testament to the kind of dog he is. For this dog to even be alive is a miracle. And to be trusting and loving after this ordeal, just says a lot about this dog."

Champion has now rebounded from his terrible physical injuries, Galante says, and he's inspired Galante, as well as rescue co-founder Leslie Yates and operations manager Carbone, to approach 2015 with a major challenge to the community:

"Don't be sorry, do something, " says Galante. Me and My Shadow has spent the past year taking in what she calls the "bottom of the barrel" dogs – seniors, dogs with medical challenges, dogs that are literally about to be euthanized at animal control unless somebody steps in for them at the 11th hour. This year, the rescue is focusing on not just taking in those tough cases, but on helping struggling owners find ways to keep dogs in their homes and on building a more compassionate community that doesn't sit idly by, simply feeling bad about the fact that there are so many dogs in need in the area.

"Maybe you can't take a dog into your house, I get it. I don't expect everyone to do that. But I do expect people who have an interest in this cause to do something. That's how I challenge people: Just do something. Tell me what you can do, and I'll work with that. We need reliable, committed foster homes, we obviously need monetary donations, we need people interested in making a change in the community for the betterment of these dogs."

To see photos of Champion shortly after he was taken in by Me and My Shadow, click here, but be forewarned: Some of the photos are graphic.
Source: www.orlandoweekly.com