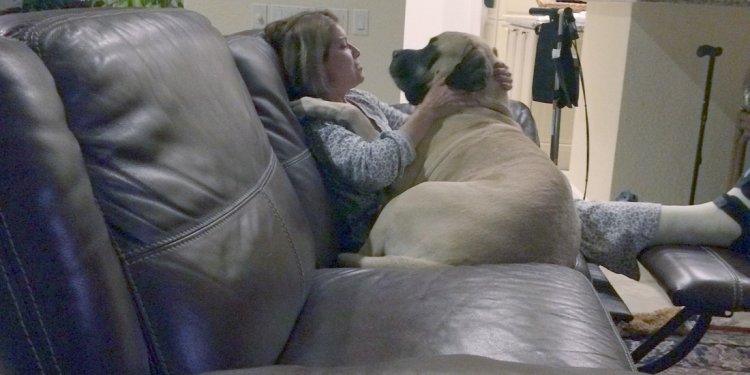 Since the "Oldies but Goodies” program started, we have placed more than 25 older dogs with families who were willing to foster an older companion. Most of the dogs were permanent fosters but some families fell in love and adopted their senior dog. One of our repeat fosters is BJ, who has brought four senior Mastiffs—including nine-year-old Max—into her home. She wrote, "I am very fortunate to have Max as my companion... My sincerest thank you to Mastiff Rescue of Florida and Grey Muzzle for enabling me to help these wonderful senior treasures."

The "Oldies but Goodies" program benefits both the dogs, who need to enjoy their golden years in comfort, and the humans who have so much to give but may need a little monetary help in doing so.

At present, we have 15 “Oldies but Goodies” in permanent foster homes, 12 came in this last year alone, with 9 being heart worm positive—which the Grey Muzzle grant helped with. Several of our “Oldies” required special procedures, which we would have had difficulty performing without the Grey Muzzle grant.

Buttercup, a Special “Oldie but Goodie”
Florida, like many other states, has its share of puppy mills and back yard breeders that dump their seniors when they are no longer a producing commodity. These last couple of years, we have taken in many, including Buttercup.

Buttercup came into Mastiff Rescue of Florida last spring after animal control caught her in a trap. She was dumped by a back yard breeder after her age and deplorable condition left her unable to make them a profit. Buttercup was in terrible shape: multiple skin issues, emaciated, infections of the wounds on her body, ears and eyes. Buttercup also did not like to be touched. At first we thought she was totally blind but we were proved wrong; she could see, just not well. She was immediately taken to the vet where we found out that she had anemia, an elevated white count, dehydration, and kidney failure. Buttercup spent her first few days in rescue at the vets receiving antibiotics and fluids. After a few weeks, Buttercup’s blood work indicated that we had the infections under control and she had gained enough weight to be spayed.

The day of Buttercup’s spay, while on the operating table, the vet found that the uterus was much larger than it should have been, full of infection and attached to her other organs. The surgery took much longer than expected. While under anesthesia, Buttercup went into a lethal arrhythmia and her heart stopped. Once that was corrected, the veterinary staff was unable to get Buttercup’s bleeding under control, thus another emergency. This surgery was more expensive, and fortunately we were blessed to have the Grey Muzzle grant to help.

Buttercup, a special "Oldie but Goodie." Courtesy of Mastiff Rescue of FloridaButtercup progressed into a “funny” girl who loved to hop and jump to get attention. She would “talk” to you when you did not move fast enough to get her something, and you had better get out of her way at meal time. Buttercup enjoyed having her belly rubbed, running in the pastures, and tormenting the other dogs to play.

Several months ago Buttercup developed a limp, which over a few days got progressively worse. One day while out running with the other dogs, she stumbled and screamed with pain. X-rays revealed a cancer of the bone. We decided that as long as Buttercup enjoyed a good quality of life and we could control her pain, she would continue to enjoy the remainder of her days on the farm.

One night it was apparent that the cancer had advanced beyond what Buttercup could endure and our vet gently allowed Buttercup to cross the Rainbow Bridge. This funny girl is greatly missed. She had a way of making you laugh when your day was just a mess, and frustrating you when you could not understand why she was nudging you or jumping around. There is now a large hole which Buttercup had filled so well.

This year, two of our “Oldies but Goodies” crossed the Rainbow Bridge, but we know that for the time they were in their foster homes, they had a warm bed, good food, and lots of love.

For information about Mastiff Rescue of Florida and all of the wonderful organizations that The Grey Muzzle Organization supports, see Who We Help.