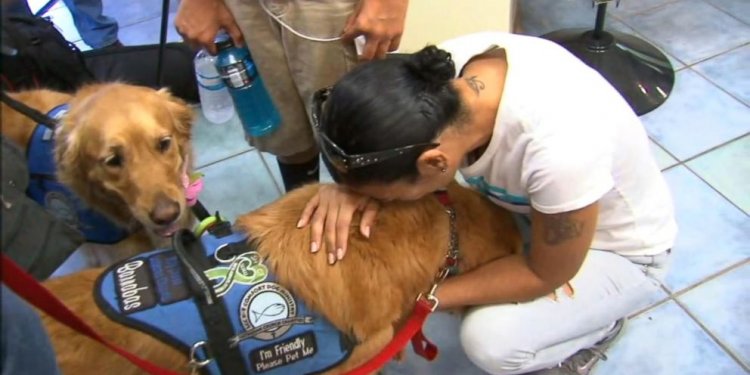 Golden retrievers are offering comfort in the wake of a tragedy.

Eleven comfort dogs, all goldens, from The Lutheran Church Charities' K-9 Comfort Dogs organization headed to Orlando on Monday in the wake of the Pulse nightclub shooting Sunday morning, in which 50 people were killed - including the suspected gunman - and 53 others were wounded.

“Dogs can help, ” Tim Hetzner, president of Lutheran Church Charities told The Huffington Post. “They’re like a furry counsel. They’re not judgmental and they’re good listeners, which is good because talking is an important part of healing process.

It allows people to process what happened.”

Girls snuggle with a few comfort dogs in Orlando.

The donation-based group, whose dogs were on the scene during the aftermath of the Sandy Hook shooting and the Boston marathon bombing, has spent its time in Orlando visiting police stations, counseling centers and were some of the thousands of attendees at Monday night’s vigil outside Dr.

Phillips Center for the Performing Arts — a little more than a mile from the gay club where the deadliest mass shooting in U.S. history took place.

The dogs visit the Orlando PD.

“We go where we’re invited and we don’t charge the people we serve, ” Hetzner said.

Hetzner also adds that all their dogs go through a 12- to 14-month certification program with professional trainers, which starts when the pup is only 8 weeks old.

“Our dogs have to be able to relate with all age groups and stay calm in all circumstances, ” Hetzner said.

Girl hugs one of the comfort dogs.
Source: www.huffingtonpost.com