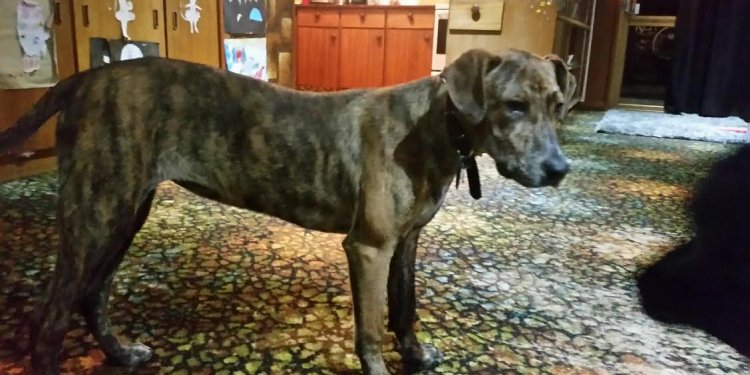 One is on the dockmaster's office at the Dunedin Marina and several adorn the walls of Casa Tina, Flannigan's and Cappuccino's restaurants.

But Hamilton's latest effort has taken her artwork in a new direction — to the dogs.

Hamilton, 37, is creating a mural on the east wall of Skip's Bar and Grill featuring portraits of 128 four-legged friends of local residents.

Hamilton and Skip French, owner of Skip's Bar and Grill, came up with the idea as a fundraiser for the Dunedin Doggie Rescue. For donations ranging from $25 to $200 (depending on the size and placement of the dog on the mural), Hamilton will paint a likeness of the animal on the wall, which is at Main Street and Douglas Avenue.

Hamilton mentioned the idea to her friend and hairdresser, Carrie Norris, who immediately signed up to have her two dogs painted.

" 'I want our dogs to be the first dogs because this thing is going to sell out, ' " Hamilton recalled Norris saying. "And she was right."

There are currently 50 people on a waiting list to have their dog on the mural, according to Hamilton, who lives in Dunedin. There will not be enough room on the original mural for all their likenesses, but Hamilton and French said they plan to expand the mural in the future to wrap around the building.

Work on the current section of the mural will be complete by Sunday in time for a benefit for Dunedin Doggie Rescue called "The Dog Days of Summer Pup Crawl."

Participants and their pets are encouraged to visit several downtown Dunedin bars and restaurants. Proceeds from food sales will go to the group. A formal unveiling of the "Dogedin Dog Mural" also will be held.

A professional photographer will be on hand to take photos of people and their pets next to the wall, and Hamilton will present a check to the Dunedin Doggie Rescue.

Portraits for the mural are made from photos and some are done as memorials to pets that have died. Hamilton said one portrait is of a dog that died in 1972.

In addition to being popular with dog owners, the mural also has become a popular gathering spot for passers-by.

"Kids love to come and see all the dogs, " Hamilton said. "I've had people stop their cars in the middle of the street to take a look."

French owns a dog named Mick that was adopted from Dunedin Doggie Rescue and he has an affinity for the group and its mission.